A place for those keen on vintage and retro bikes - steel is real.
Post Reply
32 posts • Page 1 of 1

The DHBC ‘Valley Wheelers’ are going to hold a ‘bianchi strada’ (white road) ride on Saturday 25th and Sunday 26th May.

This is part of a reconnaissance for an larger ride the ‘Valley Wheelers’ plan to hold next year. We will be purposely looking for and testing rideable dirt roads in the Bowral and Picton area.

This ride is being led by Lizanne.

Lizanne and a friend plan to start on Saturday 25th May and will spend the night at the Imperial Hotel, Bowral. Am told there is room for four.

On Sunday (26th) morning, we roll out at 8am, lunch in Picton and finish off doing a celebratory lap at the Bowral velodrome.

The pace will be steady but not slow. Will keep to a 25kmph pace.

Lizanne is presently overseas but should be back after the 12th May. She will be able to answer questions.

I don’t believe people are obliged to go for the whole 2 days. I for one, plan to train in on Sunday morning only.

Definitely interested.
Going to have a look at train timetables.
Peter Bownes
Top

If I may join you. JUst days ago I was reliving my Hunter Valley sojourn

The total ride is 140km, but the route parallels the railway and loops back on itself, so plenty of opportunity for doing a shorter segment.

Route via Map My Ride.
Top

Hmmm, any idea what sort of dirt roads are these? And what sort of bikes will be ideal for them?
I dont think my commuter has forgiven me for the Lady Carrington effort yet...
Top

I am confident they won't be as bad as the Lady Carrington Rd track. If it is, there are several escape routes home. I believe Lizanne has detailed maps.
Top

With thanks to James Rodgers - John here's an article about Kraftwerk which mentions the cycling passion which may have contributed to the break up of the band.
Have a great ride,
Peter

Re. our travel arrangements. Reaching Bowral at 10am is rather late. Lizanne, would you and Maddy mind waiting that long?
Top

I'm happy to drive to Bowral early Sunday and can fit one passenger and bicycle in the car.
Peter
Top

Likewise to HB above, driving. I'm flexi to arrive on Sat'y arvo on Sund'y mornin'. I have space for 3 ppl and 10 + bikes, Extra cab ute = many bikes in mine + riders in another car. For ' ME ' , Sat'y is prefered, accom' will need to be arranged if staying for the night. Of course train is another option, as above. Drive time to Bowral is approx' 1.5 hrs each way from the city centre, less of course if ya inner/mid' west. Coffee supplied to the driver is obliglartory

Reply here or John J has my #.

the ride is fairly long and will take all day. i totally recommend an early roll out.
also the dirt roads are more packed clay. with 1 that is optional. there is a paved road about 15m parallel to the dirt. and if you are really afraid of some gravel, you can climb razorback instead of old razorback, although there will be more traffic

here is the map (and the details)

Old razorback is less than 1km and the road condition is quite smooth. I went down it about a month ago.
You shoul totally come
Top

Sorry guys, committed to Waterfall/TT training on Sunday.
Have a great time and take lots of photos.
Top

@ Peter, if you have a spare seat still and youd like some company in yr car on Sunday let me know or v/v, I'm just as happy to do the drive and take you. Any others need lifting?

Still have a seat in the car and planning to head down to Bowral Sunday morning.
So happy to give you a lift Andy however maybe we should see how others are making their way down as we might have to both drive.
Peter
Top

Well, my plans for a train trip have been derailled by trackwork between Lidcombe and Liverpool, so looks like I'll have to go by car. Maybe Andy Peter and myself could all go together. Let me know what you think? Anyone else coming?
Top

John,
Still keen and weather forecast looks ok for Sunday.
Lizanne wants to start at about 7.30am in Bowral, which means 5.30/6.00 am departure from the inner west.
I've only space for one passenger and bicycle. Andy, you may have to be driver if you can take 3.
And are there any others coming along?
Peter
Top

weather is looking fantastic!
here is the final plan for the whole weekend incase anyone wants to ride saturday and not sunday
saturday
7:36- depart wolli Creek Train Station
9:47- arrive bowral
10 ish check into hotel (http://www.beridamanor.com.au/) drop off bags
10:30 on the road doing this loop (bowral to bowral) http://app.strava.com/activities/27383971 but with a pie stop in Robertson for lunch, and (maybe) coffee stop in Sutton Forest.
then back to the hotel for a shower and change.
followed by dinner beer, back to the hotel, sit in the spa/sauna and maybe a cheeky red to finish the night

sunday
wake up, check out, find coffee, meet at train station for 7:30 roll out
ride The Hell of The South http://www.mapmyride.com/routes/view/198859794. with late breakfast at the Historic george IV inn in Picton on the way back to bowral.
do a lap of the velodrome then look for beer/coffee/food *we can do more stops along the way.
a long late lunch will be in order. the best train out of bowral is 4:08 getting into Sydney @6. the other option is 2. but i want a relaxed lunch. unless someone has space in a car for 2 people plus bikes it look like the train for me.

for everyone coming, please pack lots to eat and plenty of drinks. Also remember a few spare tubes, CO2 or a pump. although i have never had a flat on the dirt roads. i recon now i've mentioned it i will.

it is looking like a double epic this weekend for me and Maddy. can't wait!
Top

Unfortunately I can't make it this weekend. I would have loved to do the Saturday ride as there's some epic vistas to be had there. Have a good ride everyone!
Top

" unless someone has space in a car for 2 people plus bikes it look like the train for me."

Lizanne, I can take the bikes easily, and squeeeeeeeeeeze another 2 ppl in also, and with the trackwork scheduled, this might b 'the' option. With Stops along the way to stretch and untangle.
Andy
Top

After a night at the Giro at Marrickville Road Cafe, I'll wend my way South to catch up with you White Roaders at the Bowral Railway by 7.30am.

Looking forward to a day in the sun in the backblocks of the Highlands.
Top

This looks cool, can't come but will keep an eye out for the one you are doing the reccy for. Will be geat weather tomorrow. Have fun.
Top

I'll wend my way South to catch up with you White Roaders at the Bowral Railway by 7.30am.

"wend" Great word to use Pete... Had to look up the meaning
MEANING:
verb tr., intr.: To travel along a route.

NOTES:
If you've ever wondered why we have the peculiar form "went" as the past tense of the word go (go, went, gone), today's word is the culprit. "Went" is the archaic past form of "wend". In current usage, the past form of wend is wended. The word is typically used in the phrase "to wend one's way".
Top

Apart from being unfit, overweight, and on a bike not really suited to ride the route chosen, (8spd 13- 23) I thoroughly enjoyed the whole expierence and will do another.

Many thanks to Lizanne for organising and thanks Maddy, Peter H, Peter and John J for the great time out on the road.

And STILL working on my new side gate. Should've just paid the $5,000 quote and gone riding!
Top

Well I was all set, 2 bidons, some food, pump, spare tubes, patches, multitool, lights. Air in the tyres and I was ready. My gearing was 52-42 on the front and 12-21 on the back, no problems, there weren’t many hills were there?

My rigorous preparation included watching the Giro at the Marrickville Rd Café till 1am, in bed about 1.30 and alarm going off at 5.15am…

Caught a lift with Andy and Peter B and we were in Bowral in time to start breakfast at 7.30. Out of Bowral via a stonking great hill. After Mittagong we flew down the road, maintaining a steady 34-36. The Old Razorback was fine, mostly smooth dirt, and then we were flying again. A wrong turn took us nearly to Campbelltown, where we headed south again. We then had a close encounter with traffic traveling to the Southern Highlands Bogan Muster.

Picton for lunch, and then ….. a bunch of hills. “Who put that bloody hill there?” became my catchcry. I also kept checking my right shift lever in the feeble hope of finding a lower gear. Did I say there were a lot of hills?

The closer we got to Bowral the bigger the hills got. I was grinding my way up at 8-10 kph, cursing my lack of gears. When we got to Bowral, I asked “Where’s the velodrome?” only to be told that the Bowral velodrome is in Burradoo, 5 kms away. Maddy and I rode up and down a street with “Velodrome” signs at either end, but we couldn’t find it (pretty sure I could have found it if it had been marked “hill”).

When the velodrome materialized I did my lap. Then we adjourned to the pub and I pretended I wasn’t completely shattered. A good day out, though I might pay a bit more attention to the ride profile next time. (However MapMyRide showed less than 1100 mtrs of cimbing and Andy’s Garmin showed 1800 mtrs total at the end of the ride)

Lizanne, Queen of the Mountain 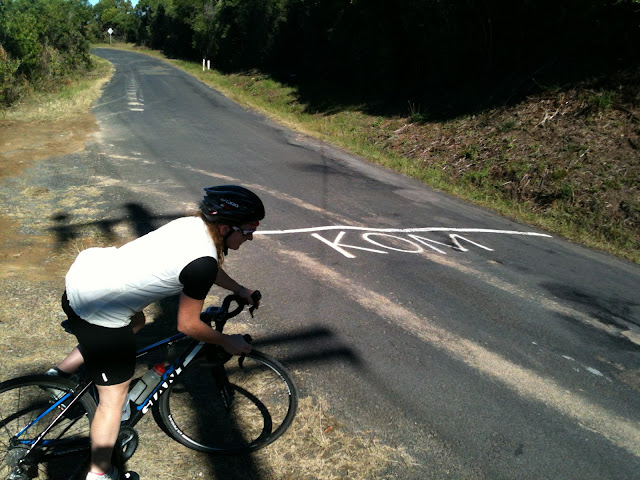 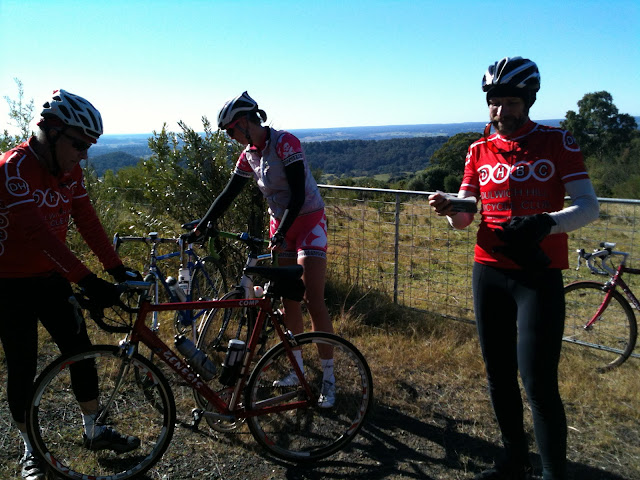 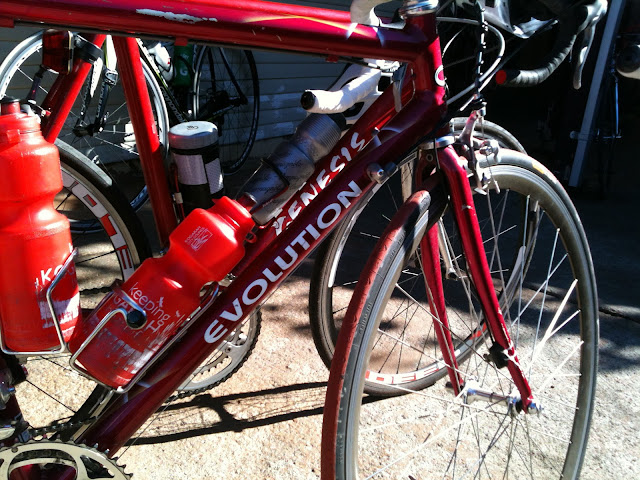 "Where's that velodrome got to?" 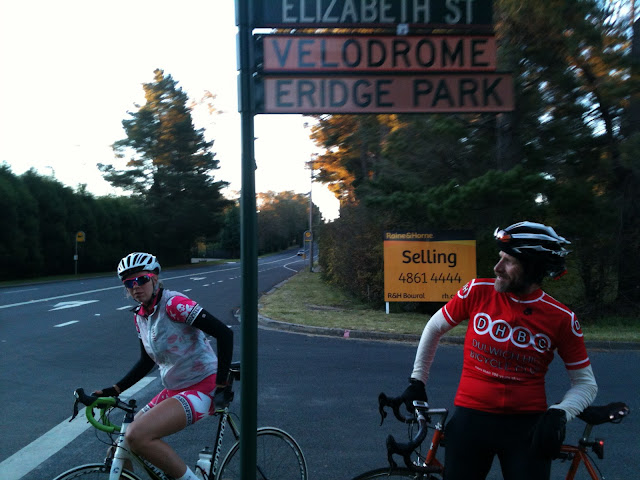 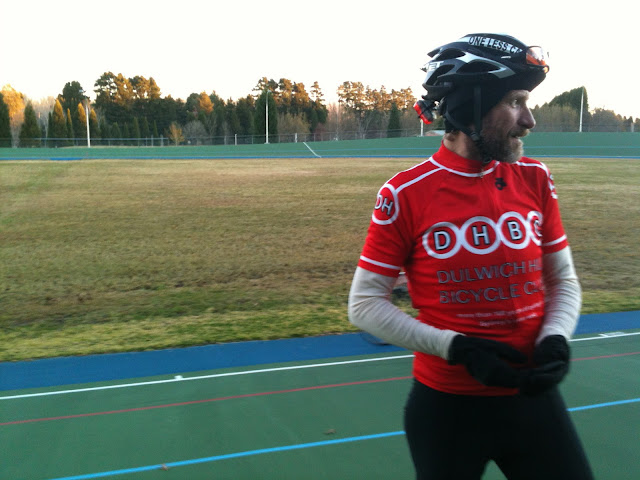 Some photos from the ride

It was pretty cold getting set to go in Bowral

Somewhere on the road to Picton yes I was one of them

"who put that hill there and who thought it'd be fun to ride on this bloody gearing????

and find that smaller camera I misplaced
Top

i think an 'epic' on monday (with dirt roads!, 2 of them and a water crossing!)

looking something like this http://app.strava.com/athlete/calendar#Apr but thinking about taking out a hill and going via Hill Top.

train leaves wolli creek @ 5:36 for a 6:30 campbelltown roll out.
stops will be coffee @bowral lunch @robertson

i want to be back for track training later that night, so the times on the strava route are what i'll be aiming for
Top

actually scrap that, i want to ride to newcastle.
Top
Post Reply
32 posts • Page 1 of 1

Users browsing this forum: No registered users and 1 guest