I believe we have a sizeable contingent of DHBC members attending the Penny Farthing Championship/Festival held at Evandale, Tasmania, this weekend.
A work colleague of mine just got back from Tassie, and coincidentally went through Evandale. Knowing I am a bit of a bicycle tragic, she bought me a postcard. Looking more closely at the photo, one can spy a red DHBC jersey and a person looking strangely like Dayna.

I didn't go to Evandale, so someone else will need to write a commentary to these pics.

“How hard can it be?” This was my joking reply to my work colleagues when they discovered I’d never ridden a penny farthing before and was planning to race on one in Tasmania. Now standing in a quiet street in Evandale reaching up to the handlebars of my steed (a “small” 48” to start), my words returned to haunt me. Lindsay had explained the technique: grip the handlebars, left foot on the mounting peg, two scoots with the right foot and then up. Ray was learning as well, with Carol and my wife and daughter watching on.

We practiced scootering. Foot on the mounting peg, “oh bugger the thing’s falling over!” Scoot “aargh, damn!”. Scoot, scoot, up, down. Scoot, scoot, up, then “argh!” down. Ok, so I’d managed to scooter without (quite) falling off. So scoot, scoot, up on the saddle, start pedaling and “I’M RIDING A PENNY FARTHING!!!” Going well, now “oh how do I get down?”, foot on the mounting peg, start to dismount “argh!” CRASH! Tarmac is hard when you fall from a height and I grazed my leg. A bit more practice and I had mastered the skill of the “impromptu dismount”, ie falling off.

Ray had proved a natural on the penny and had graduated to a 52”. I was still struggling. After I got back to Sydney I did some experimenting and discovered I could lift myself up much more easily with my right leg than my left. Ah well….

Then Ray, Lindsay and I went to Clarendon, 12 km down the road. Carol accompanied us on Lindsay’s touring bike. Her only problem (apart from the non-working brakes) was riding slow enough, 15 kph being a pretty good speed on a penny. Then back to Evandale, where we re-hydrated and carb-loaded at Clarendon Arms.

My family was staying at the Coachman’s Cottage at Brickendon, and the next morning found me waiting at the front gate for the Penny Century riders to go past at 7.30am. Lindsay was out the front and going like the clappers. I trundled along with him on my touring bike, feeling a bit like a pilot fish. Lindsay didn’t stop till we hit Westbury (after 60 km) and then only briefly. By 1.30 Lindsay was back in Westbury, where we stopped to meet my family and Ray and Carol. I headed off at Longford. Lindsay continued to Evandale where he finished by 6.30, followed by dinner and a collapse into bed. Meanwhile my family, Ray and Carol were enjoying a BBQ at Brickenden.

Part 2, in which John and Lindsay go touring, will follow shortly. 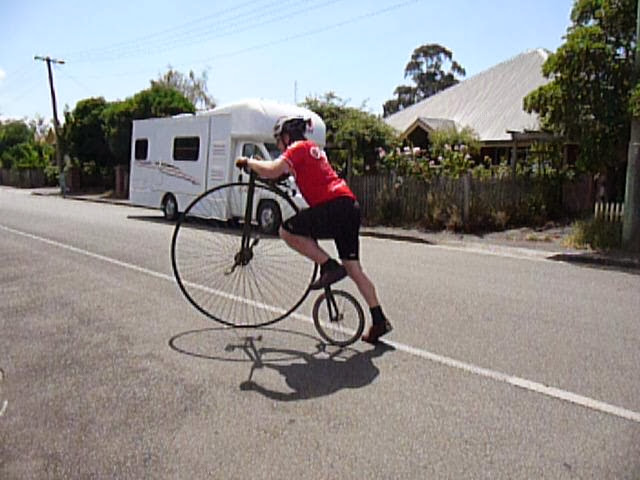 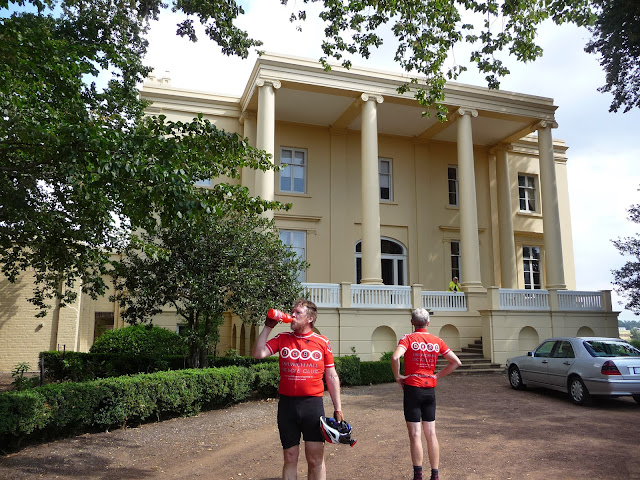 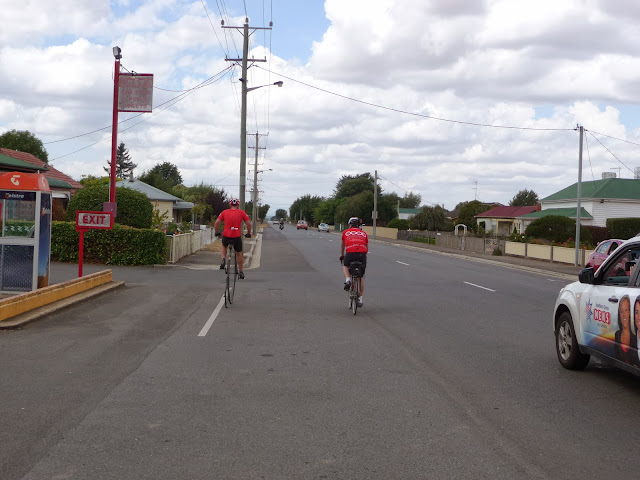 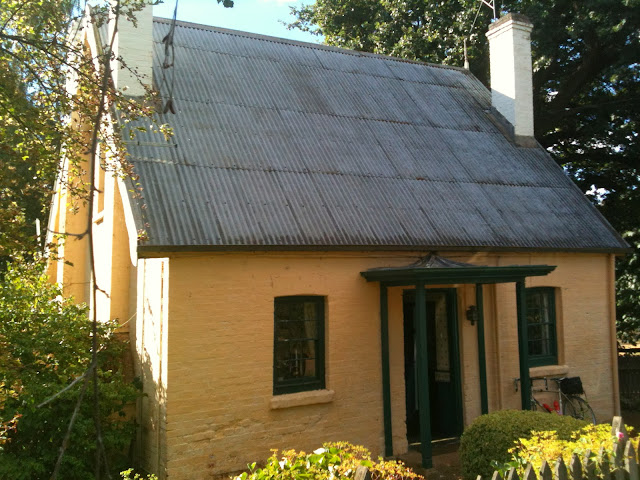 Great pics and great reports! Must go down again one year.
Top

Part 2: “So what’s the only thing you really need when you go credit card touring?”

Well, that’d be your credit card? There I was at the Mole Creek Hotel, being told that, no, my Cycling Australia card probably wasn’t going to pay for my room. My credit card was in my wallet and unfortunately my wallet was 300km away in Hobart. I had driven up with the family to meet up with Lindsay at Miena, at the top of the Great Western Tiers on Monday. Lindsay had crazily ridden there (up probably the biggest hill in Tasmania) the day after he had suffered through the Penny Century. The thought of going touring with someone who had just proved he was completely bonkers caused me some trepidation.

Our 10am arrival put paid to plans to go west to Queenstown (150 kms away) so Lindsay and I headed towards Mole Creek. We meandered past the Great Lake and had lunch overlooking it. Later a little boardwalk led us past cushion plants and button grass to a stand of Pencil Pines next to Pine Lake (no really) just before we reached the high point, 1210 metres. Then a huge swoop down through magnificent scenery and west via sleepy rural roads to Mole Creek, only to discover the Great Credit Card Debacle of 2014.

From Mole Creek we headed north by Forth (a little Bats reference) and had Onesies at the pub. Thence to Ulverstone, Penguin, Burnie and Wynyard where we stayed at the pub. So, from a pub, to a pub, via a pub. I started to drop into “the zone”, head down, hands in the drops, cranking out the pace.

On Wednesday we had day trip from Wynyard, stopping to collect fossils at Fossil Bluff (where else). Lunch at the bottle shop at Sisters Beach (no pub available) and back for dinner and more beer at Wynyard. Lindsay had idly remarked that we didn’t have any stories to tell about the trip that didn’t involve schooners of beer or roasts of the day. Thursday cured that problem for us….

I had the brilliant idea of heading south into the highlands from Burnie to get to our destination at Mole Creek. Straight into a storm, that just kept getting heavier the further up the endless hill we got. Thoroughly soaked, Lindsay suggested we turn around, which seemed a brilliant idea to me. Only after I got back to Sydney did I realize how brilliant. We’d just avoided a 180km ride past Cradle Mountain through some of the toughest hills in Tasmania.

The sun started to shine when we headed back through Burnie and then we retraced our steps to Sheffield where we had a snack. By then the wind was a howling westerly, strong enough to blow my banana peel away (on the Beaufort Scale that’s Force 8 “may blow away a banana peel”). Lindsay suggested we take the “scenic route” over part of Mount Roland, in retrospect an idea only marginally more sensible than my abandoned Cradle Mountain Epic Hill Tour. So we went west into the teeth of a ferocious headwind and passed the first turn-off to Mole Creek (25km) and cycled another 15km. There at the bottom of Mount Roland at 5.30pm we discovered that Mole Creek was now 41km away, ie the “scenic route” had added a rather tough 30km to our day.

Lindsay pointed way up the mountain to some powerlines just visible through the steadily increasing rain and said “that’s where we’re going.” Then he had a brainwave and rang the pub, asking them to save us some dinner. We then had 3km at 8-9% and I can honestly say they were the hardest 3km I’ve ever done. We started the descent, only to find the road kicked back up again. And so it went, down and up for the next 20kms before the road smoothed out. We then had about a 5km descent where I didn't touch the brakes or turn a pedal. We finally got to the pub at 8.30, greeted with “oh you’ll be the bike riders wanting dinner”. Bliss, beer and dinner at the bar, then off to bed.

Friday saw us sailing along with a tailwind. A charming Welshman named Jim invited us in for a cuppa and regaled us with stories of cycle touring in the UK in the 1950s. After lunch I headed off to Panshanger to rendezvous with my family.

John on his laden touring bike. Travelling light, but surely a credit card wouldn't have added much weight? 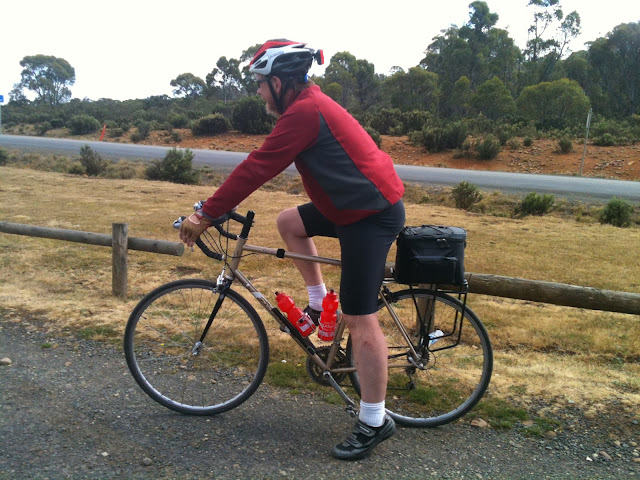 Mount Roland, a daunting prospect on a bike, especially when dinner awaits

Panshanger House, where the family stayed 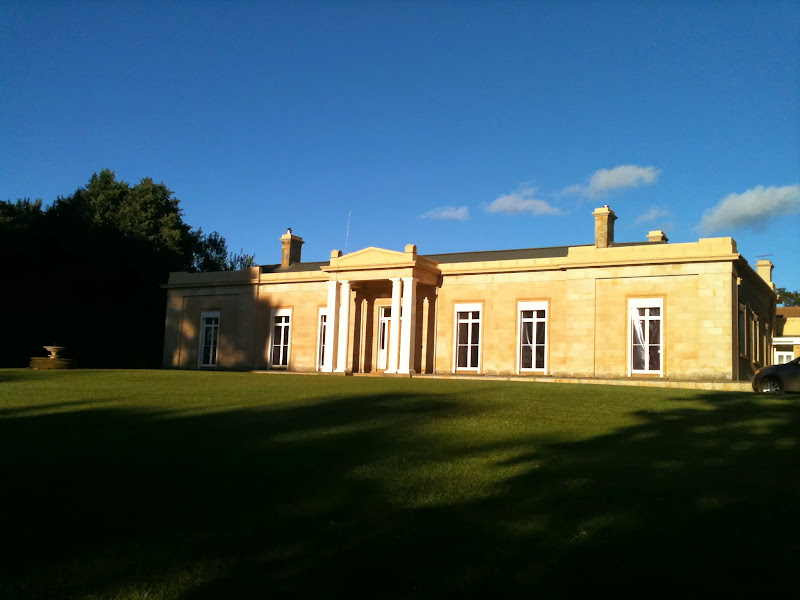 Users browsing this forum: No registered users and 15 guests